University of Washington psychologist Marsha Linehan has a strict definition of her ground-breaking Dialectical Behavioral Therapy (DBT). If a client doesn’t …

… they aren’t really in DBT. The full program is what she researched; she won’t vouch for anything less.  A new study by Van Dijk, Jeffrey and Katz of the Southlake Regional Health Centre in Ontario, Canada suggests even a cherry-picked form of ‘adherent’ DBT may still help those with Bipolar Disorder. 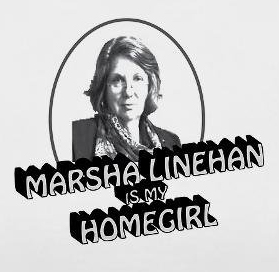 T-shirts like this are why I love the internet

The researchers enrolled twenty-six adults with Bipolar I or II Disorder in a psychoeducational group. The clients learned about their diagnosis, but were also trained in mindfulness practice and DBT’s emotional-regulation, interpersonal-effectiveness and distress-tolerance skills. After twelve weeks of ninety-minute group sessions, the clients scored higher on Beck Depression Inventory, reported greater awareness of their emotional states and less fear of the same. Six months later, they also had fewer emergency-room visits and hospitalizations. These findings echo other studies that found DBT skills group training – by itself – can be effective for depressive symptoms.

It’s tempting and dangerous to conclude DBT can be treated like a toolbox, instead of a unified whole.  Tempting, because DBT is a comprehensive therapy for challenging clients. That makes it dauntingly complex. Becoming fully versed is like learning another language. With all of its’ useful techniques, attitudes and approaches, it’s almost too simple to cherry-pick a few and call it DBT.

It’s dangerous because Linehan’s therapy depends so much on movement, speed and flow – rapidly shifting around all of those techniques, attitudes and approaches to meet a client’s needs.  Practitioners’ mailing lists often feature tales of clients firmly uninterested in DBT because of their previous experience – with non-adherent therapists whose treatment had some of the features, but none of the integrity of Linehan’s.

Carl Rogers’ use of reflective listening and Alfred Adler’s focus on the here-and-now were subsumed into the basic practice of therapy. Linehan’s DBT skills could be mindlessly assimilated the same way. Let’s have more research on how much and how little can be dropped before you no longer have an effective therapy.

David Wong‘s Six Harsh Truths That Will Make You a Better Person is a New Year’s essay for those who lack resolution – one that applies directly to treating depression.

If you want to know why society seems to shun you, or why you seem to get no respect, it’s because society is full of people who need things … the moment you came into the world, you became part of a system designed purely to see to people’s needs.

Either you will go about the task of seeing to those needs by learning a unique set of skills, or the world will reject you, no matter how kind, giving and polite you are. You will be poor, you will be alone, you will be left out in the cold.

Does that seem mean, or crass, or materialistic? What about love and kindness — don’t those things matter? Of course. As long as they result in you doing things for people that they can’t get elsewhere.

He’s talking to those paralyzed by the dissatisfaction they feel with their lives, and that includes those with Major Depressive Disorder. As  Marsha Linehan pointed out, the best medicine for unpleasant emotions is often the opposite of what the emotion makes us want to do.  “Opposite action” is Wong’s prescription for those who are disgruntled but inert: do something. Anything. Anything  more than what you do now, that would also be useful to others. He stands with  Roy F. Baumeister, whose research shows we don’t achieve because we have good self-esteem. Per the Florida State University researcher, if there’s a relationship between the two variables,  it’s much more likely we have good self-esteem because we achieve.

It’s a shame Wong builds his argument on Alec Baldwin’s role in Glengarry Glen Ross as a manager who shames and threatens his sales force.  Who gets motivated from abuse? Those galvanized by anxiety – the sort of highly-motivated go-getters who rarely need our help. Wong doesn’t scorn his readers for freezing in fear of rejection and failure. His point is simpler: the world values you for what you do. You can be valued more highly by doing more.

In cognitive-behavioral therapy, the most effective reframes for thoughts of, “I’m worthless,” are usually about accomplishments – grades the client earned, projects they completed, people they have helped. Once I’ve helped a client identify all of the reasons they aren’t garbage, I’m going to ask, “Now that we’ve settled that, what do you want to do that would make you even more worthwhile?”